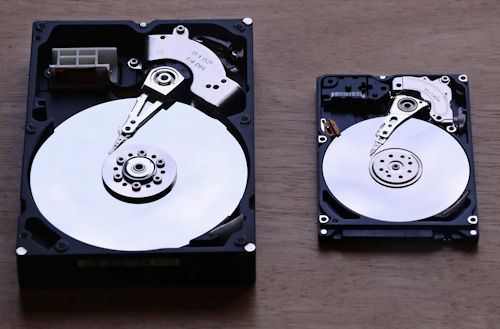 During the development of computers, the designers looked for ways to store programs in a permanent fashion. Since CPUs and RAM depend on electricity to remember data, a power outage could wipe out the program and calculations. For older computers, punch cards and paper tape were used to store software. Another method of storage was recording data magnetic tapes. These methods supported permanent storage of data in RAM. However, these methods were bulky and prone to errors. Dropping a card deck, ripping apart a paper tape or getting a tape stuck in the machine could cause data loss.

Other methods of storage were developed that required less space. The development of hard drives and removable disks allowed saving data without loss. The early hard drives were very large and did not hold much data compared to modern drives. Microcomputers started using floppy disks and cassette tapes for storage. These two methods were used at home, due to the expense of hard drives at the time. Businesses, with larger budgets, used hard drives to store data. All of these methods allowed storing data after the computer power was turned off.

Hard drives and floppies work in a similar fashion, like a record player. Data is written to the medium and retrieved using a fine needle. The data is marked as 0 or 1 in a magnetic field on the disk. A hard drive is a rigid disk while a floppy drive is bendable, hence the names for each type of drive. While both types of drives are a compact and reliable method of storing data, they can be damaged. A floppy disk is a bendable piece of plastic. If they are left in the sun, scratched, or the disk is removed from the cover, the data can be erased. A floppy disk is inserted into a floppy drive for reading. The floppy drive has a needle that can read the data from the disk. A floppy drive allows quick access to change floppies as needed. 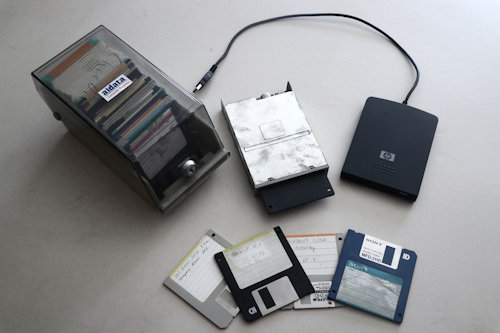 For hard drives, the surface could be scratched or the needle might scratch the surface if it was jostled. Hard drives also have a disc that stores data in a magnetic charge. This led to hard drives enclosed in cases in order to protect the disks from scratches and dust in the air. The drive case includes the needles used to read and write the data to the disc. The case protects the disk and the needle from damage while the data is accessed.

Both hard drives and floppies can be damaged if a magnet is held too close. However, if the data does need to be wiped, a magnet can be a quick method for erasing the data. A hard drive is better protected than a floppy but the drive can still be damaged. Excessive heat and shaking during operation can cause damage to the disc. A sudden power outage while the disc is accessed can cause the needle to damage the surface and cause a data loss. Tipping a computer over while the drive is accessed can also cause damage to a disc.  In spite of these flaws, hard drives and floppies became a primary method of data storage for computers.

For early microcomputers, floppies were used to store an operating system. The system would boot and commands loaded that made it easier to read and write files and work with the computer.  The commands were very simple and typed in at a command line. They allowed the user to display the files stored on a floppy, run programs on a floppy and edit programs on the disk.

As the software for computers grew more complex, the need for more space was required for the software. More commands were saved to a floppy and loaded in by users. Eventually, the need for storage space grew to a point where a hard drive was required. Floppies could only store kilobytes of data while hard drives could store megabytes. With more storage space, more commands could be stored for software programs. This allowed greater complexity in the use of computers.

As the number of files grew, methods were developed for managing files. A directory structure with folders and files in them was developed for organizing the files. On early computers, all of the files were stored in one location, which made it harder to find individual files. A file is a collection of bits written to a drive in an organized manner. The software works with the operating system to write the file to the drive and record the location of the file on the drive with a pointer. The file will probably not be stored in contiguous locations. The file is split into parts in order  to read and write the data more quickly from the drive. A table is kept on the drive with the name of the file and pointers to the file on the disk. This is like the old covers for records, which listed the songs and their order. By reading the order of the songs, you could count the grooves on the record and place the needle on the correct song. The operating system and drivers perform this function and maintain the data for all of the files.

Originally all of the files were stored in one location on the drive. A directory listing would display every single file in that single location. Folders were added and files could be separated into separate locations, which made it easier to organize and find data. Folder structures were developed, similar to the use of filing cabinets for storing file folders. Standard locations were defined and used by the operating system. 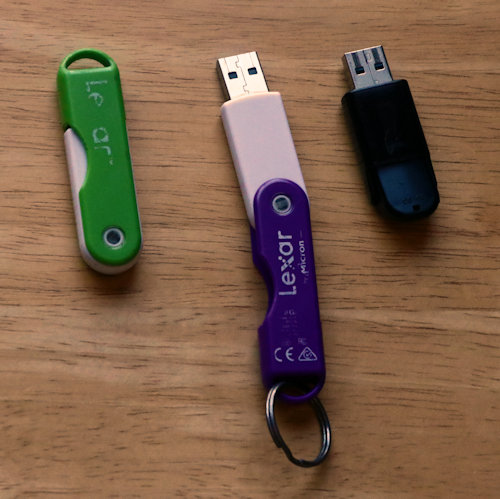 While hard drives increased their storage space, and reduce their price, floppies became less important. In addition, the use of internal networks allowed sharing data without the need to physically move a drive from one computer to another. However, portable drives still have a use. A new type of portable drive, Universal Serial Bus (USB) memory sticks were developed. They could not hold as much data as a hard drive but they could hold a lot more data than floppies. Memory cards were also used, for digital cameras and they could be moved around, just like floppies. Memory sticks are sturdier than floppies, which increased their use.

With networks and the Internet, there are now additional methods for storing files on another machine. However, for this set of articles, my intent is to focus on a local system and how it works. I'd plan explore things like network servers and cloud sharing in a future article. I want to build a foundation of how the individual computer work before the addition of network connections.

The Impact of File Storage

With the addition of permanent file storage, it allowed greater flexibility for developers and users. The development of data, for software or information, could be performed over several sessions. The data was stored with the computer and it was quicker to access. The additional storage space allowed for the growth of complexity of software and data stored with a computer system.

As drive space increased, the type of files also increased. The ability to store music, photographs, books and other digital media added value to computer systems. While hard drives provided large amounts of space, the digitization of music and graphics required the use of a lot of the drive space. IN order to stretch out drives, this helped to increase the development of compression algorithms. With the use of compression for music files like MP3s and graphic files like JPEGs, it allowed the storage of more data in the same space. Drive space is relatively cheap now, but compression is still useful when receiving or transmitting music and graphics over the Internet.

The need to manage the data on computers helped to drive the development of operating systems. With different file types there was a need for different software to read the files and output them. Initially users had to buy software for things like playing music or displaying graphics. Operating systems now include basic programs for these functions and support software for editing or creating new files. The operating system had to also read the drive and understand how the files are managed. In early days a sudden power outage could wipe out the data and the operating system could not recover. Today's operating systems are more robust and have better error recovery if data is wiped by power outages or user error. The use of tables for file locations makes it easier to format a drive and make it appear to be empty of data. However, a hacker can take such a drive and use tools to restore the table and access to the data. For sensitive data, tools are used that overwrite all of the data on the disk when it is no longer of use.

With the increase of file types, there was also the possibility of loading a virus or malware, software that was meant to corrupt data and the computing experience. This led to the development of antivirus software and the need for security during the use of drives. The development and use of drives increased the possible uses for computers. It also increased the complexity of managing the computer system and signaled the beginning of the need to consider security when managing computers. Without data storage, a CPU and RAM would have limited use. Hard drives, floppies, memory sticks and other storage increases the usefulness of the computer. The next consideration is entering data into a computer and interacting with the data. A computer needs a method of Input and Output to take the next step in usefulness. My next article will provide an overview of Input/Output (I/O) devices and the capabilities they add to a computer.

Picture taken by J.T. Harpster. Prints of select photos can be purchased at Redbubble.