As part of autism awareness, I would like to announce our upcoming book about our family and experiences with autism. The book has completed our editing process and I am in the process of pulling it together for publication. The plan is for a release in September 2017 and I will be posting more information during the next few months. Writing this book has not been easy for my husband or myself, but the feedback we’ve received has been positive. I hope that sharing our experience can help other families. 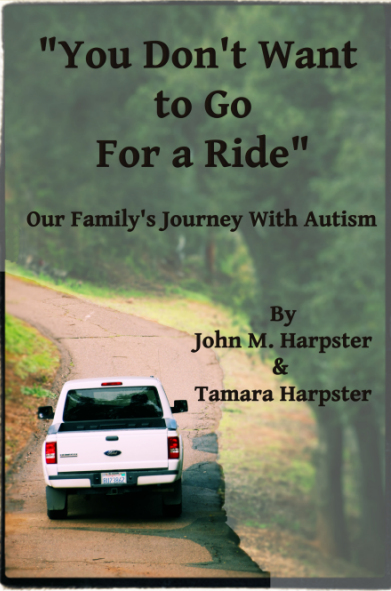 Here is the description of our book, “You Don’t Want to Go for a Ride”: Our Family’s Journey With Autism by John M. Harpster and Tamara Harpster.

In the early ‘90s, John and Tamara Harpster became the parents of an active, inquisitive baby boy. As he grew from an infant into a toddler, he began to exhibit signs he was different from other children his age. When he attended preschool, his parents discovered his remoteness, tantrums and speech delays were due to autism. After his journey to adulthood his parents are sharing their experiences in the book “You Don’t Want to Go for a Ride”.  Their story reveals a family dealing with the demands and issues of autism. Read of their struggle in first bridging the critical ability to communicate with their son using artwork and LEGO bricks to build his speech. Then read about their challenges when they discovered that even speech wasn’t always enough as his verbal skills improved.

Get an intimate look into day-to-day life of a family dealing with safety, temper, isolation and hopeless days as they desperately try to connect and understand the little boy trapped inside.  Along the way, they learned the crucial bond of family and appreciating normal moments of home life that most people take for granted. Learn of their experiences with homeschooling, meltdowns, special interests, and isolation from others and within the family. Their firsthand account tells of their mistakes and the decisions where they found unique ways to break through and connect with their son in his world. In addition, each chapter gives readers lessons learned along with reference information for that phase of life from other books and studies.  Both parents tell this compelling story and the details of their experiences with family, their son and the world of autism.