This last weekend, as I thought about things to do for the Fourth, my husband became the recipient of some free peaches from a local roadside stand. The person at the stand offered the peaches because they had been out of honey for the last few weeks. My husband was delighted and figured I would also enjoy them. 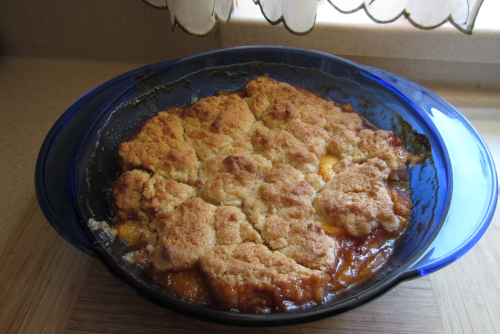 However, he did not remember that I don’t like peaches at all. I do not like the smell, taste, or texture, it is an unpleasant experience if I try to take even a bite, never mind eating an entire peach. Now, whenever I opened the refrigerator door I was confronted with poor, innocent fruit that I didn’t want to go to waste. Somehow, I came up with the idea of making a cobbler and my husband agreed enthusiastically.

I knew I would have time today to do some baking, so it seemed like a good day for my project. I got up early and found a recipe for cobbler on the internet. I’m sure my cookbooks have a recipe for cobbler but nowadays it seems better to search and find my own, personal, version of a recipe that thousands of other people have used and vouched for as the best ever.

I printed out the recipe, got the peaches out and ran into my first hurdle - how the heck do you peel these things? I thought the skin on the outside was inedible but since I have never eaten a peach, I don’t have empirical evidence of this fact. Back to the computer, another search and violà, an article about how to peel a peach. And there was three different methods! The boiling method looked interesting but the disclaimer mentioned that the peaches had to be just right in ripeness, not under ripe or over ripe in order for the method to work. I looked at the peaches warily, unsure of their ripeness and decided to go with the first method, which involved quartering the peaches and smoothly pulling the skin off. The video made the process look easy and I was sold.

Needless to say, not everything is as easy to do as an internet video. I quartered the peach and reached to pull back the skin and slide it off, like removing a sock from a foot. In this case, the sock was two sizes too small and stuck to the foot with duct tape. I was able to shred off a few pieces of the outside and at that rate I would have finished peeling the peaches by sundown. Maybe, the outside did not want to lose contact with the fruit. Since I had other things I wanted to do, I decided to try another method.

The next step involved a paring knife, I found one and started peeling but ran into another issue. As the sticky, gooey, slippery peaches slipped in my hands, feeling like a large wad of yellow, sticky, slippery snot, it made it difficult to get a firm grip. Meanwhile, I had a sharp knife I was attempting to use to remove the peach skin while not slicing my skin or fingers in the process. As the knife barely missed my hand, again, it was time to move to method three.

The third method involved boiling water and ice water, so I crossed my fingers that this method would work. I dropped the first peach into the boiling water for 30 seconds, than cooled it off in the ice water. I uncrossed my fingers and found some loose peach skin to pull on. I was amazed it worked! I quickly boiled the rest of the peaches and peeled their skin. I then sliced the peaches and pulled them away from the pit and soon had a bowl full of the slices.

The rest of the cobbler was easier, I was now in familiar territory with mixing and baking. My only other glitch was in mixing up the crust and wondering how small I should chop up the butter, per the recipe instructions. At least the recipe makers had timed things out well, it did take me 10 minutes to mix up the crust to a fine, meal like texture before adding in boiling water. I’m pretty sure the boiling water melted those bits of butter that I hadn’t chopped small enough.

The cobbler baked, the crust was golden, and it smelled edible. I tried a small bit of the crust, which passed the taste test. My husband had some and said it was passable so the peaches have been used. I stuck with my chocolate chip cookies for my dessert, with a small bowl of ice cream as an extra for the holiday. Happy Fourth of July to everyone!