Most of the action for the book Doing the E.T. Tango: Dancing with the Universe takes place in the northwest portion of Wyoming. The book tells the story of a group trying to break into an Army base to recover proof of an alien landing and the government cover-up. As far as I know, there is no secret base and no alien spaceships or bodies hidden out in the far corners of Wyoming. However, there are legends of alien visitors, UFO's and other mysterious beings. The Native Americans of the area, the Crow Nation, have stories about the Little People, a race of dwarves that lived in the mountains of the Big Horn Basin. Most of the stories are centered on the Pryor Mountains, the northern part of the Big Horn Basin.

The Little people are reported as being about 18 inches tall, having round bellies, incredibly strong arms and legs, little or no neck and many sharp, canine like teeth. Stories were told about the the great strength of these dwarves and their spiritual powers. One story of the Little People tells of a one killing and carrying off a bull elk with o help. Other stories tell of revenge against entire families for the misdeeds of one individual. The stories all tell of small people, who aren't human and have extra abilities when compared to humans.

History was changed by one encounter between one of the Little People and the Crow leader Plenty Coups. When Plenty Coups was a boy he went searching for a vision and was met by one of the Little People. While walking with this person he was told of the disappearance of the buffalo and the loss of the Crow's lands. However, he was also shown the way to avoid this fate, by acting like the chickadee and listening to the white people. By paying attention to these new people and not fighting them, he was told their tribe would survive and would have keep their sacred land. This vision guided Plenty Coups and other Crow and changed how they interacted with the white people in the area. Eventually the Crow kept their land with the reservation system including sacred land around the Medicine Rocks in Montana.

There is a great deal of speculation on what the Little People were and if they really existed. There is some similiarity between the Little People and the fairies of Europe. In the 1930's a mummy was found that may have been one of the Little People but it disappeared before it could be fully studied. Pictures of the mummy show a small, humanoid creature, with large eyes that would have been about a foot tall when it stood. Scientists say the mummy was most likely of an ancephalic infant but if that's the case why was it reported to have adult teeth? 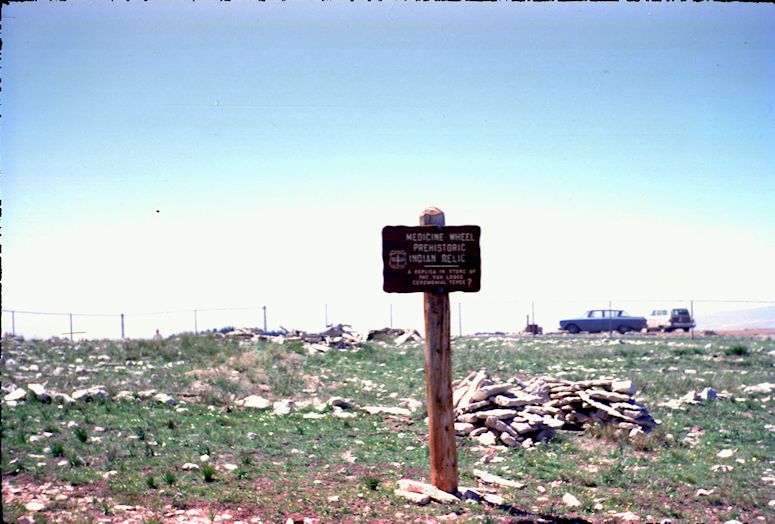 Other signs in the area point to possible alien visits. A site of petroglyphs shows a drawing is eerily similar to descriptions of aliens in modern times. There is also the Medicine Circle in the Big Horns. The Medicine Circle was reported as already existing in the area before the current Native Americans settled in the area. It is located at 10,000 feet where there is a clear view of the entire Big Horn Basin. It is accepted that the circle was probably used to predict the summer solstice and used for ceremonies by the Crow. However, if the wheel was already there when the Crow moved in, who built it? Was it built by other Native American tribes or by aliens, such as the Little People, trying to contact home?

When visiting the Big Horns and seeing the open space, it can be easy to believe that aliens might visit here in order to stay out of the public eye. At night this feeling increases when there are few city lights between you and the stars of deep space. Sometimes the shiver down your spine isn't just from the cold wind at 10,000 feet.