This Memorial Day I am taking time to remember people. In particular, I remember  family members who served. My mother’s side of the family has had a strong interest in their history and so I have documentation of earlier generations. As I browsed my collection, one article stood out. It is from October 1945, and is an article about four members of my grandfather’s family who served in WW II. My grandfather, his older brother and two of his younger sisters all served. My grandfather served as a doctor in the Army, in Europe as part of the 42nd Air Repair Squadron. His brother served with the Navy, in San Diego, than in Guam as a Surgeon General for the Marine Corp. He also served for six weeks as part of the Iwo Jima campaign and received a citation and bronze star for his Iwo Jima service. The two sisters also served, one as a dietician and the other as a cadet nurse.

On my father’s side of the family, his uncle served in the Army and is buried in Arlington. He served in Guam and in Japan after the war. On my husband’s side, his father was a machinist who worked on the production of guns for the military so he also stayed at home supporting the war effort.

Going a bit further back, I know I have a great-great grandfather who served in the Union Army during the Civil War since I have seen a tintype of him with his wife from that era. I have done a little bit of genealogy research and I suspect that some of my ancestors served in the Revolutionary war, especially when I find names like ‘George Washington Rogers’ in the family tree.

I did not grow up hearing stories about the military service from my family. My grandfather mentioned he liked the show MASH because it was the most realistic show about doctors serving in war.  I only know of one picture of him in uniform after he came home.  I heard that my grandmother made him burn the uniform afterwards because it was filthy and stank. He did look very happy in the picture, I suspect he was very happy to be home. There was also a picture of him in dress uniform from the war but those are the only reminders of his service.

His service appeared to be something he considered a small part of his life. He and his family settled in Wyoming and he continued his service, as a doctor and volunteer within the community.  I found an article and interview from his retirement. He helped get a hospital and a golf course built and said, “That was probably the greatest year I can remember. In 1957, we built the hospital and the golf course at the same time. What more could you want?” In another quote he was commented about their first years in Wyoming and he said “I suppose those first years were kind of rough, but it was the same for everyone and you didn’t notice it that much.” For me, this sums up his approach to life, things can be rough, but everyone has problems so it’s better to work on solving our own problems instead of complaining.

Now that I’m older I wish that he and my other grandparents were still around,  I’d like to sit down and listen to them talk about their lives. I suspect I would hear about struggles and joys, similar to what I’ve experienced and yet somehow they all made it to another day.  In the meantime, here are some photos that I found interesting as I remember loved ones on this Memorial Day.

I've included scanned images below, along with the text associated with them.

10/22/1945 – Family of Officers – Mr. and Mrs. A.S. Rogers of 407 Gordon Street have made an unusual contribution to the war effort in having four children in the service at the same time.
All four are graduates of the Fort Collins High school. Lt. Wilbur Rogers, a graduate of the medical school of the University of Colorado, practiced medicine in Los Angeles, Calif., before being commissioned in the Navy in January, 1943. He was a surgeon in the San Diego Naval hospital for 18 months, then he was sent to Guam as surgeon general of the Twenty-first Marine Corps. During the Iwo Jima campaign, he served there for six weeks, but has since returned to Guam.

For his service on Iwo Jima, Admiral Nimitz personally gave him the bronze star medal and citation on June 22, 1945.

Capt. Anthony S. Rogers also is a graduate of the CU school of medicine. He practiced in Missouri before being commissioned in the army in September, 1942. He has been in the European theater of operations since July, 1943 with the Forty-second Air Repair squadron. He is expected to return home soon.

Second Lt. Phyllis M. Rogers is a graduate of Colorado A&M college and received a commission as a dietitian in July , 1945. She is now stationed at the Birmingham General hospital at Van Nuys, Calif.

Lucille Rogers, cadet nurse, is a graduate of Colorado Woman/s college at Denver. She is still in training at Nebraska University hospital, which she began in September, 1943.

The citation given to Lt. Wilbur Rogers, a copy of which has been sent to his parents here, declares he “was directly responsible for immediate uninterrupted care of the wounded throughout the regiment… His leadership, courage, professional and technical knowledge and devotion to duty enable medical units of his regiment to meet the many difficult problems of the operation and to save many lives. His conduct throughout was In keeping with the highest traditions of the United States Naval Service. 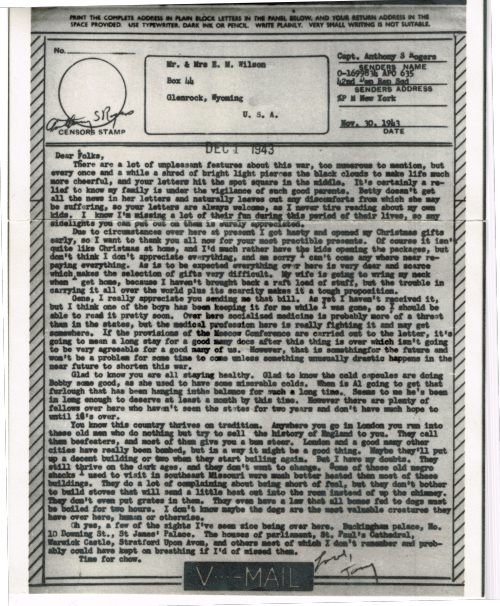 There are a lot of unpleasant features about this war, too numerous to mention, but every once and a while a shred of bright light pierces the black clouds to make life much more cheerful and your letters hit the spot square in the middle. It’s certainly a relief to know my family is under the vigilance of such good parents. Betty doesn’t get all the news in her letters and naturally leaves out any discomforts from which she may be suffering, so your letters are always welcome, as I never tire reading about my own kids. I know I’m missing a lot of their fun during this period of their lives, so any sidelights you can put out on them is surely appreciated.

Due to circumstances over here at present I got hasty and opened my Christmas gifts early, so I want to thank you all now for your most practible presents. Of course it isn’t quite like Christmas at home, and I’d much rather have the kids opening the packages, but don’t think I don’t appreciate everything, and am sorry I can’t come any where near replaying everything. As is to be expected everything over here is very dear an d scarce which makes the selection of gifts very difficult. My wife is going to wring my neck when I get home, because haven’t brought back a raft load of stuff, but the trouble is carrying it all over the world plus its scarcity makes it a tough proposition.

Gene, I really appreciate you sending me that bill. As yet I haven’t received it, but I think one of the boys has been keeping it for me while I was gone so I should be able to read it pretty soon. Over here socialized medicine is probably more of a threat than in the states, but the medical profession here is really fighting it and may get somewhere. If the provisions of the Moscow Conference are carried out to the letter, it’s going to mean a long stay for a good many docs after this thing is over which isn’t going to be very agreeable for a good many of us. However, that is something for the future and won’t be a problem for some time to come unless something unusually drastic happens in the near future to shorten this war.

Glad to know you are all staying healthy. Glad to know the cold capsules are doing Bobby some good, as she used to have some miserable colds. When is Al going to get that furlough that has been hanging in the balance for such a long time. Seems to me he’s been in long enough to dese4rve at least a month by this time. However there are plenty of fellows over here who haven’t seen the states fo two years and don’t have much hop[e until 16(?)’s over.

You know this country thrives on tradition. Anywhere you go in London you run into these old men who do nothing bu try to sell the history of England to you. They call them beefeaters, and most of them give you a bum steer. London and a good many other cities have really been bomed, but in a way it might be a good thing. Maybe they’ll put up a decent building or two when they start builing again. But I have my doubts. They still thrive on the dark ages, and they don’t want to change. Some of these old negro shacks I used to visit in southeast Missouri were much better heated than most of these buildings. They do a lot of complaining about being short of fuel, but they don’t bother to build stoves that will send a little heat out into the room instead of up the chimney. They don’t even put grates in them. They even have a law that all bones fed to dogs must be boiled for two hours. I don’t know maybe the dogs are the most valuable creatures they have over here, human or otherwise.

Oh yes, a few of the sights I’ve seen sice(sp) being over here. Buckingham palace, No. 10 Downing St., St James Palace. The houses of parliament, St. Paul’s Cahtedral, Warwick Castle, Stratfor Upon Avon, and others most of which I don’t remember and probably could have kept on breathing if I’d missed them. 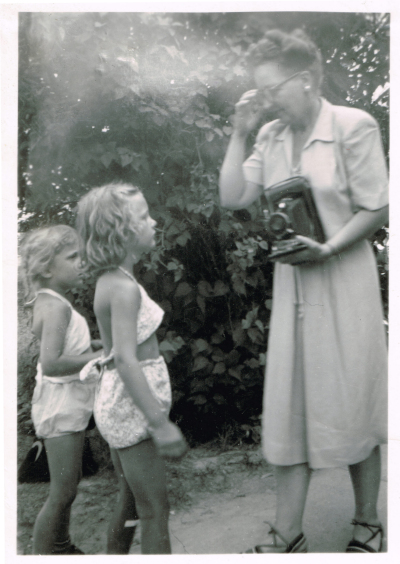 My great Grandmother Hazel, with camera. My mother and her sister are the children in the picture.