I’m running behind again on the next chapter for “Year 2038 Bug” so it will be next month before I have the chapter ready. I am writing about Brian and his daughter Deidre and after writing most of the chapter it doesn’t feel like the right path so I need to do a rewrite. I am also working on another project, which I am close to finishing part of it, and I’d like to complete my writing on that so I can then focus more on my book in progress. I want to see if I can get caught up and build up a buffer, if I can get two chapters done I will publish both of them next month.

After events of this week, it would be natural to post about shootings, guns, ineffective government, mental illness, etc. However, I feel that there are many others posting many different viewpoints and I don’t really want to enter into that contentious realm of debate, with all of the anger and distress over these events. I care about what happened, but I am not a great writer who will move the debate one way or another. I’d rather write about our cat, who is still very much a kitten, in order to provide a quiet place for others who may also need a break from the news. 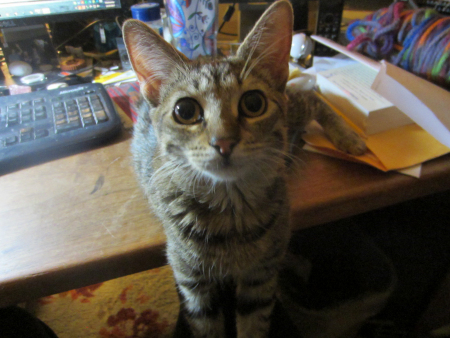 Last October we got a rescue cat, a seven month old kitten that my son picked out. This cat has a personality and walks around our house, sure of himself, tail straight up, lord of all he surveys in his domain. Until he sees a laser dot or hears the jingle of one of his plastic balls rolling across the floor, all dignity is then thrown aside as he launches himself, slips across the tile, then catches up with the object. Or chases the toy underneath the curtain where he catches his claw on the fabric. After a few laps of chasing, he lays down, tired, yet looking as if he is suddenly bored with our feeble efforts to entertain him.

There are times I feel like we now have a toddler in the house, as I step over a cat toy in the dining room. At night, I’ve also squinted at a furry form on the stairs, wondering if some creature has snuck in from outside or if the little toy squirrel stuffed with catnip was left out, again. At least he is staying off the kitchen table, there were a few weeks where he was determined he would walk around on the table just to show he could. Add in the times I’ve almost tripped over him as he decides to shoot up the stairs when I head up and things can seem a bit chaotic. 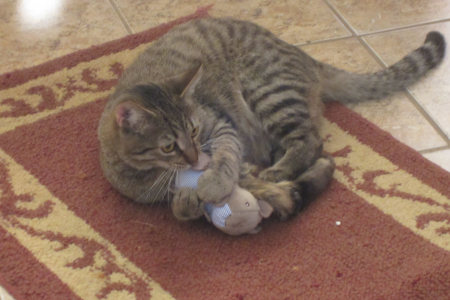 However, he is can be a cuddly cat and he loves company and to be with people. I smile when my son goes to his room and the cat, Simon, suddenly appears beside him, matching his gait as they both gallop up the stairs. When I pick him up and start scratching him, his purrs are loud and he snuggles up for more attention. Sometimes I feel like he picked us so he could bring us smiles and giggles with his antics. I hope everyone else finds something to smile at, I know it helps me to appreciate the good things in my life and all around me.